Front-Page Friday: 4-22-2016: How Stalking Changes a Person and How You Can Help

April 22, 2016
It didn't seem fitting to have a "Fun-Treat Friday" in regards to the issue that Heidi Angell is bringing to my blog today, so I decided to call this issue of "FTF" "Front Page Friday."
It's a Front-Page Worthy Cause.
Click Here to See How You Can Help!


Hello Chantal and her lovely readers!

I am honored to be here today as part of April is Sexual Assault Awareness Month. I am the author of the Hell School Series, which is a YA contemporary fiction series based on my experiences being stalking in high school. The first book Hell School: Fresh Meat released in March.
In our modern society, stalking is the fodder of memes, jokes about cyber stalking, and melodramas of made-for-tv movies. Society doesn’t seem to take it seriously at all.
Yet the National Intimate Partner and Sexual Violence Survey, United States, 2011,” commonly referred to as NISVS released a report on the statistics of stalking. The report examines sexual violence, stalking, and intimate partner violence victimization using data collected between January and December 2011.

In this report, which is almost 5 years old, some pretty horrific stats are reported:

And these statistics are just from the US!

This is a serious problem, and people are making light of it. That saddens me.

One of the reasons that stalking is such a problem is that often police are not able to do anything until it escalates to criminal behavior. Unfortunately the law in most places has only recently begun to take into account the emotional damage that occurs to a victim before a “criminal act” ever occurs. Lawmakers have recognized the trend of behavior that almost always leads to violence if it goes unchecked. In many places this issue is still not being addressed. Even in places where laws have changed, those enforcing the laws rarely do.

So let’s talk a little bit about how stalking affects the victim. I am uniquely qualified to discuss this as my high school years were plagued with a stalker, and that experience affects me to this day.

The number one affect a stalking victim lives with is fear.

Depending on the level of stalking and the amount of time one is stalked that fear can morph into Post Traumatic Stress Disorder. I can remember almost knocking my brother out once because he came in to wake me up. In that half-awake state, I went into defense mode.

My husband and children have learned the hard way that it is not ok to “surprise scare” mom. Each has gotten hit because of it. It is completely involuntary reflexive response. My body decided long ago that I would be a survivor, not a victim.

I don’t do well in crowds, particularly crowds in the dark. Before my stalker, I loved crowds!
I don’t do well in new places. Whenever we go out, I have to sit facing the door and I have already scanned and planned an exit strategy. This is hardwired into my brain.
For years I was afraid to be alone. Even now, if I am alone my doors and windows are locked and every little sound sends me into defense mode.

The second greatest damage a stalker does is creating a rift in the victim’s sense of the world.
I was raised to trust, respect, and obey those in authority. I was taught that they are there to help me. But in the case of my stalking experience, that respect and trust was broken. I had teachers and school administrators ask incredibly inappropriate questions that implied that somehow what was happening was my fault. I had police officers tell me that there was nothing they could do. I had adults who were supposed to protect me giving my stalker advice on how to attract me!

Now, that is not to say that everyone in authority let me down. There were a few special people who, although rules and the law said that they couldn’t do anything, still made a great effort to protect me going so far as to blatantly threaten my stalker at the risk of their own jobs.
I had people who proactively taught me how to protect myself, and encouraged me to take a women’s self-defense class.

But the trust and respect that I held for authority is gone. Now I have to gauge and judge everyone one-on-one.

The last thing a stalker does is change a victim irrevocably and permanently.
I used to be a sweet girl who was generally happy and easygoing. As my mom likes to say “I didn’t have a mean bone in my body.” Years later, I can still put on that demeanor.

But do not cross me.
I know how far I am willing to go.

I cannot fathom killing an animal, but I have imagined killing a person. I know how to and what circumstances will lead to me killing someone.
I have a hard time trusting people. It is easier to keep a small and close knit set of friends than to constantly be weighing and judging people. For someone who was once a social butterfly, it is a lonely existence.

I have a hard time connecting emotionally. I struggle with being vulnerable.  I am working on that.
Well, thank you so much for letting me be vulnerable with you today. 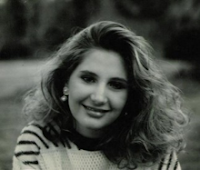 Heidi Angell is a bibliophile, lexicomaniac and wordsmith! She is the author of The Hunters Series, The Clear Angel Chronicles, and The Hell School Series. She also created Royal Prince Vince, and Creative Exercises to Inspire,

When she is not reading and writing, she can be found spending quality time with her lovely family camping, hiking, swimming, or watching movies.  Learn more about her and her books at HeidiAngell.comWant to help build awareness about the dangers of stalking? Join The Geek Street Squad and help spread the word about Hell School: Fresh Meat.
april author chantal gadoury Front Page Friday heidi angell sexual assault awareness month