10 Things I Love About Allerleirauh

August 21, 2017
The story of "Allerleirauh" has haunted me for most of my life. When I was a child I had heard this story, and the magic (and the dresses) stuck with me for years. Perhaps it was a story that I was always meant to write. With inspiration, help from friends, and a boost of confidence, I set out to write my very own 'fairy tale'  retelling . . . with "Allerleirauh." 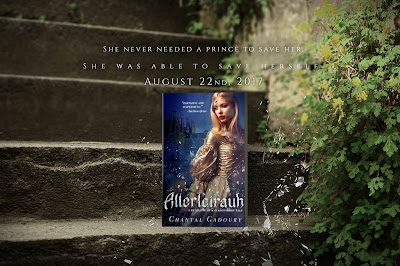 On the eve before the release of "Allerleirauh," I wanted to share the ten things I love about this story - and hopefully you - as the reader - will love it too.

1)  The Romance:
If there is one thing to know about me, it's that I love Love. I love Romance. I love reading it and watching it in all sorts of platforms: movies and books. One of my favorite things about "Allerleirauh" is the sweet romance between Prince Klaus and Aurelia. I wanted there to be a sweet romance in balance of the horrible relationship between her and her father. There's a beautiful scene at a lake cottage, a boat ride, and a private dance in a candlelight hall. Sounds perfect, right?

2) The Gowns:
If there is an important aspect to this story, it's the gowns. There is a lot of emphasis on the gowns in the original fairy tale, with them being made of the sun, moon and stars. In many mythology, tales, and faith - the sun, moon, and stars are all symbolic. I felt it was really important to keep those gowns and the fur cloak since it's such a central part of the entire fairy tale. I had a really great time looking up high fashion pictures and choosing more outfits for Aurelia - for when she's living with her father, to her time in Saarland der Licht. I wanted there to be a difference in her attire, while keeping the importance of the gowns ... and what they symbolized for her personally.

3) Prince Klaus
So, Prince Klaus is one of my favorite characters that I've ever written. I drew from some inspiration from my time writing on Tumblr, to a friend and her son. (And Prince Eric from "The Little Mermaid." Eric was a HUGE inspiration to Klaus as a character.) I wanted Klaus to be more than just a 'flat' Disney / Fairy Tale Prince ... I wanted him to have a real story, with real feelings and while being 'good and kind,' also being human. He has his own struggles. . . and tries to keep a balance of what is expected of him in regards to his royal duty, to what he should do to keep himself happy. I hope everyone loves Klaus just as much as I do.

4) The Castles
I had so much fun finding the Castles of "Allerleirauh."
When I first saw a picture of "Lichtenstein Castle," I knew I had found the home of the Mad King and Aurelia. It's old, German, and very 'fairy-tale' like. I had an easy time imagining poor Aurelia locked away in the castle. Being that she slips out of her window and runs away, obviously - the castle acted only as an inspiration... 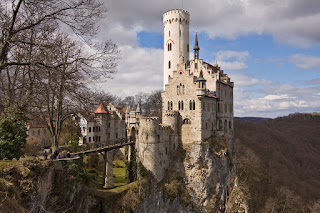 When it comes to Saarland der Licht - I saw a picture of the Château de Chenonceau - and knew it was the home of Klaus that I had been looking for. Originally, I had based much of the interior on the beautiful golden charm of Versailles, but I wanted something that was MUCH different from Tranen, and . . . felt 'grander.' And it truly felt even more 'fairy-tale' like than "Lichtenstein Castle." What do you think? 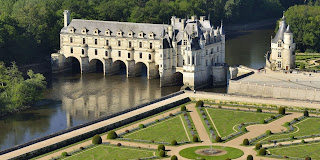 5) Hidden Gems
I loved hiding gems throughout the pages of "Allereirauh." The name Aurelia is related to "Golden" - which just seemed fitting with the theme of "golden hair." The word "Tranen" means tears in German, which made it perfect in describing the Kingdom of the Mad King. (A bit of foreshadowing!) Saarland, which is a real place, is followed by der Licht or ... "Of Light." Again. Foreshadowing!
I wove some real life history into the story of Klaus ... his older brother dying as a child, and his name being Arthur. (King Henry VII had a son named Arthur, who had died as a child as well. His brother, the infamous Henry VIII would be the King who married and murdered his wives.)

6) Hard Issues
Don't get me wrong. Writing about rape was NOT my favorite thing to do. I'll honestly say it was hard; it was hard to put my mind in such a dark and dangerous place. But I wanted this story to be much more than just "another retelling" of a fairy tale. I wanted this story to carry a deeper meaning. So much has occurred in our current-day world, and there are so many who have been left to feel as though they don't have a voice in situations regarding sexual, physical, mental and emotional abuse. If "Allerleirauh" could bring a voice to those who feel as though they can't speak - if it can help someone to feel as though they're not alone. . . then I've done my job as a writer. I wanted to try. I wanted to try and make a difference, even if it was laced with a "Once Upon a Time," a Prince, and a "Happily Ever After." Everyone deserves their own Happily Ever After.

7) Fairy Tale Inspiration
I had a lot of fun re-exploring all of my favorite fairy tales and using their stories as an inspiration to write my own. I can say that I spent quite a few hours watching and re-watching "The Tudors" and "The White Queen." I went to my favorite authors, Robin McKinley, Alex Flinn, and Edith Pattou and re-read my favorites, "Beauty" and "Beastly," and "East." As I mentioned before, I was inspired by Prince Eric for Prince Klaus - and used wanted to use the element of making Aurelia a guest in his home, rather than the original "scullery maid."

8) Equality
This element was really important to me, which is why I changed some of the story in my retelling. Originally, when the Princess is taken to the Prince's castle, she is to work as a maid in his kitchen. The Prince doesn't know the maiden he dances with during the three parties he hosts, is indeed Allerleirauh. . . There is this "inequality" that I felt between the two. Making Aurelia a guest in his home, I felt they were on equal playing fields. Klaus had the freedom to seek her out for friendship, as she did too. She wasn't separated into a different "class" as him. I didn't want to make the Princess "less" than the Prince. There are so many novels and / or stories that showcase this difference. Women are often written as weak, "damsel-in-distress" people. . . and really, until recently have taken on this "Girl-Power" mode. I wanted to stay true to that. I wanted to write about an empowered woman, and help to inspire others too. Klaus is her friend first, lover - second. Klaus doesn't "save" Aurelia... she saves herself. He just reminds her that she's more. . much more than what the past has done to her. And I think we all need that reminder from time to time.

9) The Royal Balls:
I mean, who doesn't love a good royal ball? Personally, I enjoyed writing the dancing scene between Klaus and Aurelia when they're alone. It's a time for them to fall in love . . . to become friends, to learn to trust. But the father's parities was fun to write, along with the final ball scene at the end. Anything is possible. Glittering gold, beautiful gowns, sweeping musical scores. I listened to a lot of "Anna Karenina" and the "laendler" song from "The Sound of Music." Again - I watched a lot of "The Tudors" and "The White Queen," to get more of a feel of what was going on during the Medieval Times - and what it was like to attend such a royal occasion. But it was fun to write and immerse myself in such a setting!

10) The Epilogue:
The original publication of "Allerleirauh" didn't include an epilogue. After I had self-published the novel, I decided that the story didn't feel like it was "over." This time around, in publishing with The Parliament House Press, I was lucky enough to be able to include this epilogue. I wanted to give Aurelia and Klaus a chance to a fresh start. . . and the epilogue, is my way of giving not only her - but everyone a sliver a hope . . . a glimpse of letting go (Respectfully.) It's probably one of my favorite "endings" that I've ever written, and I hope that everyone who reads this novel - enjoys it as much as I do.