December 29, 2015
So, I've started a new novel -- or really, a novel that I've had going on for a while. Back about a year ago, I wrote my fiance a non-fiction/fiction version of our relationship. I think I really finally put down everything that I thought and felt and things that I really only knew. I've been wanting to write something that soft and fluffy and not really intense the way "Seven Seeds of Summer" is -- and the way "Allerleirauh" is.

If you're not familiar, I would eagerly suggest to you, reader, to check them both out. Keep in mind that "Seven Seeds" is my first novel -- full of mistakes and cliche characters. I feel that "Allerleirauh" is at least something that I'm very proud of -- a lifetime's dream come true. I've always wanted to write a re-telling of the story, and I'm glad that I finally did.

Now it's Roberto and I's turn. I've got two new Characters : Charlotte (Charlie) and Liam. Liam first started as Corey - which is actually one of my favorite names, thanks to "Boy Meets World," -- Corey Matthews -- but decided to maybe make Corey a Liam thanks to a TV show that I haven't seen -- just heard about -- "The Royals." I'm in love with the actor who played Peter Pevensie and is actually on that show too -- as Liam.

It's actually going to be called "From: Me -- To: You" (I think for now) -- with music as a big factor in chapters and character development. 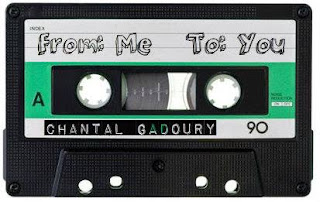 Music is a big thing in both Rob and I's life. When we were just friends, I'd always give him mixes of songs -- and songs are really important. I'm sure there are tons of couples who share mixes with each other to show and express themselves -- and this story is going to be exactly that. The rough copy that I have the story is roughly 22,000 words -- so it's a good start, but I'm really going to have to re-write some scenes and characters -- I was really good at capturing the people in our lives, and I'm sure if some people read about themselves -- they might get extremely offended (or just mad).

Either way -- I haven't stopped, and I plan on always writing for as long as I can. I'm a writer -- it's in my blood. Words just came and go in my mind -- just like characters. They wash up out of no-where and demand to be shared with others.


For now -- I'll keep you posted on more about "Allerleirauh" and keep your eyes out for more info about "From: Me -- To: You" !
author book chantal gadoury new novel published writing young adult