Showing posts from July, 2016
Show all

After the Fire: Promo Blitz

Contemporary Romance Date Published: June 22, 2016 A STAND-ALONE NOVEL In his lifetime, Gaige Benson has dreamed of only two things. Playing football and Violet Reed. WELCOME TO THE NFL The Seattle Knights have the hottest players in the game. On and off the field. Second Chances. First Love. Gaige Benson is the NFL's golden boy. He's done it all. Won every award. Except that elusive Super Bowl ring. This year he is hanging up his cleats and he plans on going out a winner. Even a golden boy has secrets. Will Gaige's past be the one thing that derails his future? Violet Reed almost lost it all. Her sight, her dreams of becoming a doctor, and the only man she ever loved. A miracle saved the first two. Sixteen years later she is getting her second chance at love. Secrets kept them apart. Will the truth separate them forever? Get your copy of the stand-alone sports romance rea
Post a Comment
Read more

Mystery, Cozy Mystery  Date Published:  June 28, 2016 A witch. A murder. A wedding dress? Dylan Apel is having one heck of a summer. She knows her hand-made clothing is special, but magical? Discovering that she's a witch is bad enough, but when Dylan realizes there are folks who’ll kill to possess her witchy powers— that’s enough to make a girl want to hide out in the back of her boutique. Only problem is, Queen Witch is in town, itchin’ to make sure Dylan learns to cast spells, and this witch won’t take no for an answer. Dylan must learn fast—someone just killed her best client with a poisoned gown meant for Dylan. Was it the tall, mysterious hottie in black, who's suddenly everywhere she goes? After all, the first thing Roman Bane says is he doesn't like witches. Is he here to save her, or kill her? Dylan is barely getting a handle on her new powers when she finds herself surrounded by witches bossing her this way
Post a Comment
Read more

To Win A Viscount: Release Blitz

About the Book Title: To Win a Viscount (Daughters of Amhurst #2) Author: Frances Fowlkes Genre: Historical Romance ***** England, 1820. To gain a certain marquess’s notice, Lady Albina Beauchamp aims to win the derby. What she hadn’t planned for is the price handsome Mr. Edmund White asks in payment to train her to race: each lesson for a kiss. A first place finish isn’t the only thing worth racing for Lady Albina Beauchamp is in love with the Marquess of Satterfield. Unfortunately, his only interest is in horses, and doesn’t know she exists. But when the marquess confesses he will bestow his undying admiration on the jockey racing the winning horse at Emberton Derby, Albina sets out to win his affections by training to race. Mr. Edmund White is a master groomsmen for the Earl of Amhurst in line for a viscountcy, should he abandon his passion for horses and become a respectable sheep owner. But horses are his love–until he meets Lady Albina and her silly
Post a Comment
Read more

About the Book Title: A Knight with Grace Author: Laurel O’Donnell Genre : Historical Romance Lady Grace Willoughby defies her father’s orders to marry Sir William de Tracy and escapes with a friend. She has no intention of wedding a cursed man, a man ostracized from the church, a man who would only doom any future children they might have to the fires of Hell. She prays for a knight to rescue her. Excommunicated and outcast for a horrible crime in his past, Sir William de Tracy searches for forgiveness. Marriage has never crossed his mind until Lord Willoughby commissions him to retrieve his fleeing daughter and honor the dying wish of his father by marrying Grace. But things are not as they seem. And when an assassin tries to kill Grace, William must choose between his soul and the woman he has come to love. Can William and Grace overcome their past and find the redemption and love both are so desperately seeking? Author Bio Bestselling, critically ac
Post a Comment
Read more 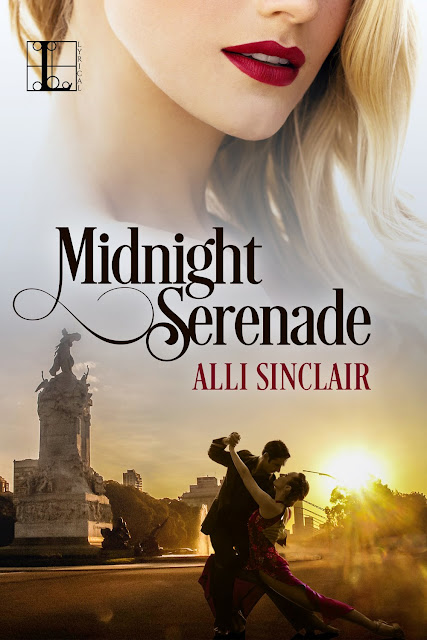 Midnight Serenade by Alli Sinclair   GENRE: Women’s Fiction ~~~~~~~~~~~~~ BOOK BLURB: On the sultry streets of Buenos Aires, the daughter of a world class tango diva searches for answers about the mother who abandoned her—and uncovers decades of lies and deception…  After twenty years of wondering why her mother chose the tango over her, Dani McKenna finally travels to Argentina. What was it about this beautiful, mysterious land that enticed one woman away from her own child—and broke another’s heart? As a journalist, Dani may have the opportunity to find out. And an enigmatic tango dancer may hold the key to her quest—if she can break down his defensive walls.  Carlos Escudero had been Dani’s mother’s protégé. Tragedy ended his career and he refuses to be interviewed. But he will give Dani some insights, on one condition: she must agree to his tango lessons. As the two begin the intricate dance of passion, Dani’s quiet, logical world is exchanged for
2 comments
Read more
More posts