Welcome back to a new "Trendy Tuesday."
It's been a while, and I really apologize for that. There's been a lot going on in my personal life that has kept my blog from being what I planned.
But, with that said, I'm so excited to FINALLY have this author on my blog today for an
AUTHOR INTERVIEW!
(Again, another one that has been long-time coming.)

I have Curtis Smith, the Author of "The Rising of the Elements." 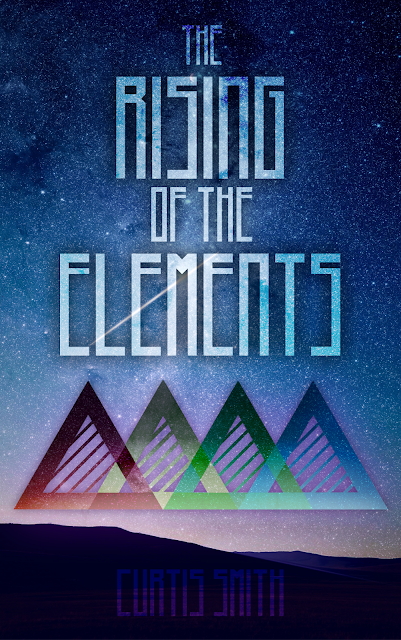 (I just have to say Curtis, this cover is awesome.)
Author: Curtis Smith
Novels Published: "The Rising of the Elements"
Published March 8th 2016

Without further ado, I give you Curtis Smith!

When did you first consider yourself a “writer”? - When I got my first copy of The Rising of The Elements, before that I felt like I was simply testing out being a writer.

If you were a donut, what kind of donut would you be? – Most people call me a donut already (I think it might be a British thing?) so I guess I already am one. But otherwise, I guess I’d be a simple, basic glazed donut, no complications.

If you could take a character from your novel on a date, where would you go and what would you both do? - That’s a tricky one! I’d actually take Deatra Allstrong, the villain, to a museum or an art gallery. Mostly to try and calm her down and pick her brains.

What was the publishing process like for you? If you self-published, what obstacles have you come across in the process of publishing? – It was invigorating; the anticipation gave me so much energy! It was stressful too, I’d be lying if I said it wasn’t but it was certainly an interesting and relieving period. Being self-published, it was difficult to get my name out there and get people’s attention. I feel like it’s tough for people to take you seriously when you self-publish, so when I was publishing the book I tried to make sure that people knew I was serious and the book itself was serious.

If you type into Google “Your Name” – what is the first thing that comes up? Curtis Smith Dead: 5 Fast Facts You Need To Know… how brilliant!

Do you have any future books planned or in mind? – I have the sequel to The Rising of The Elements, which I’m writing alongside a comedy/drama called To Be Young about a group of young people who go on a roadtrip and crash as many parties as they can.

If you could be any part of a happy meal, which part would you be? (i.e hamburger? French fries? The free sundae?) – I’d be the French fries! Slightly salty and tall.

Do you have a favorite character from your books? Why?: - It’s a constant switch-up between Warren Potes and Darcy Cassano from The Rising of The Elements. At the moment I’d say it’s Warren Potes, his character is based on a combination of some of my friends and he’s funny and genuinely kind. His ‘arc’ was a lot of fun to write, especially as it directly involved Darcy Cassano. I’m very proud of Darcy’s character, she’s fierce, strong and immensely powerful but also very funny and excitable.

If we were to go to a book store together, where would I find you?: - I’d probably be in the graphic novel section looking at Marvel or DC stuff, if I’m completely honest. You could also find me in the Society, Education and Politics section looking for books on feminism, socialism etc.

What is your favorite character’s “favorites”? Give us a list! – Warren Potes’ favorite things?
1.    Spaghetti Bolognese
2.    Isaac Williams, his one true love after Darcy
3.    Beyoncé (in context of the book, Beyoncé would be in her mid-70s)
4.    Squirrels

Do you have a certain routine you have for writing? – Always at my desk, taking occasional breaks throughout, and also taking breaks if my favorite show at the time is on (for TROTE it was Humans, Doctor Who and Modern Family).

Do you read all the reviews of your book/books? – Why or Why not? Can you remember your first great one and the worst one? - I’m only just starting to get reviews in, but I’m definitely paying attention so I know how to approach future projects. I’m fortunate (and unfortunate) enough to have received some ‘reviews’ in person, I remember when my friend told me he loved the book and it was a great feeling. I also recall being told in person that somebody didn’t like how the book ends (on a cliffhanger) and that they felt I had cheated them!

How do you come up with characters names and place names in your books?: - For the majority of my main characters I create their characters visually using real actors and then come up with names for them, some have special meanings/translations. I also use real people I know (first name only) as supporting/background characters as I feel like it’s a nice acknowledgment. I try to use real places as much as possible as long as it’s not defamation, I had to change the name of a place (now known in the book as the Cave of Canorum) because it was Fingal’s Cave (a real cave in Scotland) until I realized I had made it too ‘mystical’ and it was included in a threatening scene so I didn’t want to risk it.

What is your favorite book and Why?  Have you read it more than once?: - Jacob’s Room by Virginia Woolf, I’ve read it at least three times. I love its message and its ambiguity in the approach to narrative.
Your favorite singer/group is?: - Florence and the Machine, such a fantastic group. My favorite song of theirs is Never Let Me Go. Also, at the moment I’m a huge fan of a singer called Låpsley, I’d definitely recommend checking her out and listening to Love Is Blind and Operator (He Doesn’t Call Me).

Your favorite color is?: - Blue!

Which comes first? The character's story or the idea for the novel? – The character’s story, at least for me. I knew I wanted to tell a story of a strong, impressionable young person in a world where you can use the elements and how that could cause conflict, and then the idea for the novel came, although it initially started out set in a school called Occulta.
How do you hope this book affects its readers? – I hope it affects readers in a way that makes them recognize the strength and importance of young people in society, and that you can make a difference, no matter how big or small, which I’ve tried to reflect with characters like Isaac Williams and Jenna Sutherland, to minor characters like Bruce Day.

If you could have any superpower what would you choose? – Telekinesis! I’d also really like to fly, but as I’m not very good with rollercoasters I do wonder how I’d react to being able to fly (is there even a correlation?). So, for sure telekinesis.
What’s your favorite season/weather? – Autumn, not too cold and not too hot. I love it when it rains too, I’m particularly fond of petrichor which is what the smell when it rains after it’s been dry for a while is called!
If you could meet any famous person, who would it be? What would be the first thing you say to them? – I’d want to meet Chris Evans aka Captain America, he’s so cool! I think I’d be a bit starstruck and forget to say anything though. I’d also love to meet Margot Robbie, Eddie Redmayne, Florence Welch and Chris Pratt.

Favorite Superhero ? – I have too many favorite superheroes! I love the Flash, closely followed by Captain America, Scarlet Witch and Spider-Man. Squirrel Girl is pretty awesome too!

Thank you, Curtis for joining me on my blog today! It was great to have a chance to hear from you and learn more about you as an Author!