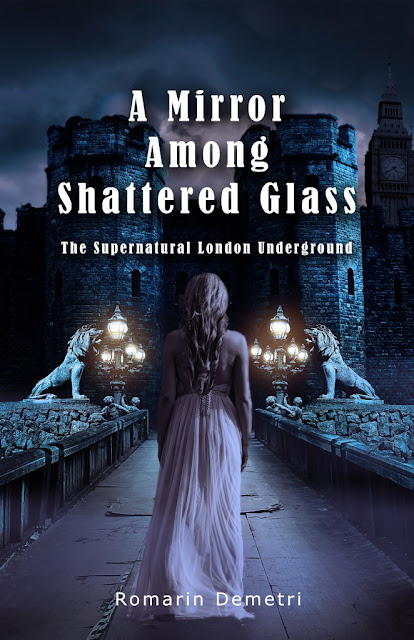 Blurb
Unable to contain the deadly nature of her family secret and powers, nine-teen year old Romarin Demetri hails from California, U.S.A, to unearth her heritage as a descendant of serial-killer, Countess Bathory, the woman that lent Dracula his legend, and cursed Romarin with an appetite for blood.
Unenthusiastic about relocating to her birth city of London, a charming paranormal investigator with claim to the throne could change her mind, as he leads her to the only living and distant relative she has: a raven-haired recluse named Talia, who has taken refuge in an old castle in the heart of the city, and doesn’t seem to have a heart of her own.
After a rough introduction to the lethal, inappropriate, and enchantingly sarcastic people she calls her housemates, perhaps the other misfits will be her first true friends; However, as much as these people are like her, they still have hidden vendettas, a taste for revenge, and will struggle between what is just, and what will settle their psychological upheaval. There is only one way for Romarin to become part of the Supernatural London Underground: Can she be the one who challenges them to put down their ghosts and demons and make their world together?

Today Romarin Demetri joins me today on her Book Tour with a Guest Post, where she'll speak about the title of her novel "A Mirror Among Shattered Glass."

Book One of the Supernatural London Underground is about the main character, Romarin’s journey in finding out who she is at nineteen—and before it’s too late because her powers are out of control! Her American, adoptive parents kept her safe for so long, but after a horrible accident… Romarin begins to refuse the one thing she needs to live. Romarin can gain the memories and talents of other by… drinking their blood… a superpower inspired by stories of organ donor phenomena, and how stories of transplant recipients describe them taking on characteristics of their donors. The legend and truth surrounding Countess Bathory, prolific serial killer, give Romarin a very dark legacy.

In the first book of the series, the main character has to come into her own, and to keep the plot moving, the mirror is introduced as a method of self-reflection, as Romarin sorts out her jumbled mind that includes the thoughts of paranoid suicide victim, Richard, and impulsive, teenager pickpocket, Nicoleta. While the personalities cannot talk to each other (Romarin is relieved by this), their memories ebb and flow in her mind, just as memories can come to us at any part throughout the day. A family memory jumpstarts Romarin’s brain back to herself in a flashback concerning the death of her older sister, and Romarin wakes up in Talia’s hall of mirrors, a woman who shares the same ancestral roots as her. Both Romarin and Talia are descendants of countess Bathory.

The title describes both Romarin and Talia’s journeys in London, and became a very symbolic theme, used throughout the novel. Light will also be a theme used for many characters throughout the series—not just Romarin and Talia. Without giving too much away, Talia’s power works through electricity, which can essentially make glass. Her office is a hall of mirrors, as she hates her appearance and is trying to flood the fear out of the pores of her purplish skin. The way Romarin sees mirrors stems from a very superficial past hiding from everyone, and also the realization that she’s going to have to be the light for everyone she meets in England.

Referred to as “Mirror,"  "A Mirror Among Shattered Glass” contains a cast of dark characters with fragmented pasts, who live in a world that needs some rebuilding.
Romarin is the one who needs to challenge them to put down their ghosts and demons and make their world together. 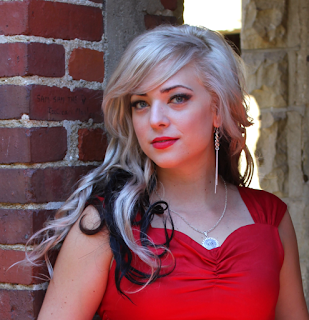 Romarin Demetri is a story crafter who loves black coffee, traveling abroad, and when her characters come home in some sort of trouble she swears she didn’t invent. Pulling from her B.A. in English and Psychology, her debut series, The Supernatural London Underground, is a blend of fantasy ground in reality, and a world a reader can truly escape to. As an eccentric and reader, she still enjoys creating the alternate reality in her urban fantasy series (more than anything!), and her interactive world waits for you at RomarinDemetri.com.

Thanks for stopping by today! I hope you all enjoyed reading about
"A Mirror Among Shattered Glass" 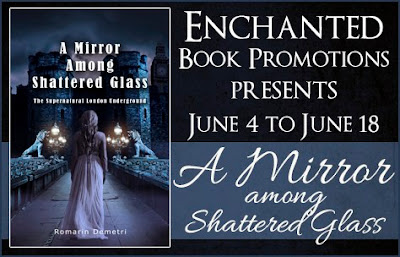