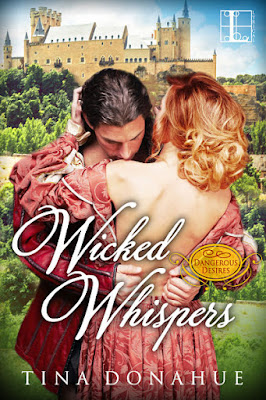 As the Inquisition gains force, even the faintest rumor can brand one a heretic. In this world it is Sancha's gift--or curse--to be blessed with the gift of healing. But the villagers are in need of her arts more than ever, and she feels it is her duty to help them at the risk of losing her life. And at the sacrifice of her heart…

Enrique has never wanted a woman as he does Sancha. Determined to have her love, he woos her with exquisite passion, giving her refuge to pursue her healing in secret. But their very desire and escape from the ruthless forces of the world may be their undoing. And together, they must pit themselves against a jealous rival and archaic tradition to secure their place in a hopeful new dawn…

He looked at her. “Never have I met women like you.”She inclined her head slightly to concede his point. “Now you understand why I said you must find another more in accord with your needs.”“I want no one but you.”“Enrique.”He’d cupped her face, his thumb skimming her bottom lip. Her mouth tingled. Her breath spilled out on a wanting sigh at the tenderness and desire in his expression.He reined in his gelding and lowered his mouth to hers.She couldn’t fight him. Didn’t want to. The night was perfect for love, their attraction too intense, his kiss soft and searching at first then filled with raw male need, his tongue slipping into her mouth.Sancha sagged against him, suckling his tongue as though she’d been born for the task, loving his clean flavor, his strong caress.With the reins in one hand, he eased his other beneath her shirt, fingertips grazing her skin.She should have pulled away, told him to stop. Trembling with unbearable need, she opened her mouth even more to his tongue, inviting him to invade her deeply, intoxicated by his scent and strength.She ached for him in a way she couldn’t deny. All her life others had told her how sinful lust was. For her to avoid it at all cost. A woman’s purity was worth more than love. Passion could fade in a moment. Chastity alone proved a female’s honor the same as valor did with a man.She’d never doubted those truths, having rarely thought of them until now.Within Enrique’s embrace, she was complete for the first time, even though they had no future.
~~~~~

This story was really delightful, edgy and had me turning the pages of my Kindle faster than I ever expected. This is a story of a fiery romance set with danger and excitement twisted within the plot.

At first, as I began to read "Wicked Whispers," I wasn't sure what to expect. It begins with the knowledge that a wealthy nobleman "Enrique" is in love with a girl named "Sancha" and has been for quite some time. In whatever "passions" that were never met to Enrique - given his line to Isabella
"It would appear your sister has never shared my passion,"
Sancha is not interested in marriage - belonging to a man in any way and staying independent to pursue her life's work as a healer. (Which is already tricky for the time era this novel takes place in.) Avoiding one marriage proposal already, (To Enrique's brother, Fernando), Sancha's sister Isabella takes it upon herself for her family and sister to go forward with the arrangement. (And kinda tricks Fernando too!)

As the story unfolds, Sancha takes "refuge" in Enrique's home after having already hid away in his brother's castle. It is there the story between Sancha and Enrique and their passionate desire for one another soon begins to unravel.

Rumors begin of Sancha being a witch and Enrique does everything he can to protect the woman he has loved for so long.


I was really impressed by the fantastic character development and the immersive world that Tina created for all of the readers. (And you can't forget about the steamy scenes!)

You will come to love this novel! (And don't worry, I hadn't even known there had been a book before this! This novel really works as a stand alone romance!)

Tina Donahue will be awarding winner's choice of 5 ebooks - 25 choices to choose from - full-length, bestselling, award-winning romance in contemporary, paranormal, menage, and suspense (International) to a randomly drawn winner via rafflecopter during the tour.
Click Here to Enter to win the choice of 5 of the author's books - a Rafflecopter giveaway