Today, I have another really special guest on my blog, and I'm really excited to present this author. I met this wonderful person on GoodReads, and I had a chance to read her very exciting and thrilling book "Eden Bound." Who could this be?

It's the fantastic author, Kyrah Winters! 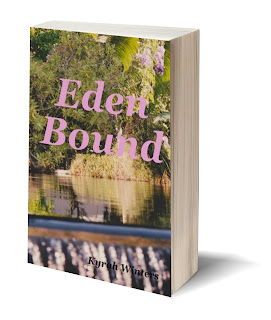 You can find her novel HERE

Summary:
While lost on a Grecian coast, Karis stumbles across a mysterious man who always seems to show up when he's least expected. She begins to fear he is stalking her, but he claims they are fated to meet, that destiny has plans for them.
“I told you to stay away and now you haunt my dreams? My mind is playing some sick joke on me.” But when Karis discovers the hidden otherworldly creatures, a past she didn't know happened begins to repeat itself. Will they survive the outcome or is history doomed to repeat?


So, without further ado, I'm going to let Kyrah take it away! Thank you for joining me!

How much time did you put into your book(s?) - from the original idea to finishing writing it?:
I would say it took me about a year to finish Eden Bound. I took influences from everywhere – Even television commercials. I'd just constantly write down little things that inspired me or that I wanted to include in my book and then I read through my lists and see how and where I could incorporate everything.

Do you have any future books planned or in mind? :
I'm currently working on the next part of Eden Bound. It might be a while yet as I wasn't planning on giving the last one such an open ending, but I had so much fun writing it I couldn't resist. I have given more lines to characters that were kind of sidelined in the last book. I wanted them to play a more prominent role earlier on in the story but I just couldn't find a place to put them. Originally Eden Bound was written completely from Karis's view but somehow Alexander slipped himself in there.

What is your favorite book and Why?  Have you read it more than once?:
My favorite book is not necessarily the best written, or the most popular. But it's one that really sparked my love of fantasy novels. It is Afterlife by Stephanie Hudson and is probably the only series of books that I've read more than once. I just fell in love with the characters and story. The world is so richly created, it amazing what Stephanie came up with. Most people say it takes a while to get started but all good relationships take time to develop and I enjoyed every second of reading it.

Do you think books transfer to movies well? Which is you favorite/worst book to movie transfer?:
I really think that depends on the book. It's hard when you have an epic fantasy series and you try to show this amazing world. The writer has no budget on their imagination. The scale of the world they create has no limit. People demand the best nowadays – if your movie doesn’t look good they are going to rip it apart. But also, when you read a book, yes the author may give you small details, like the color of the character's hair, or the size of their home. But ultimately the world and its inhabitants are built in your mind, your imagination fills in the rest of the details. So when a movie is made, of course, it won't look how you envisioned that world, we all see things differently.
I actually read a part of twilight a while ago – way after the movies had finished and I really enjoyed it. The first movie wasn't that bad, but the way the book was written was just so much better. At least now I can understand what people mean when they complain about it.

Your favorite color is?:
I have to be a cliché and say I'm a totally girly girl and baby pink is my favorite color – with black being a close second. My house is actually pink if you can believe that!

What was the hardest part to write in this book?
The ending. I know the most common practice is to see the end in sight and work towards that. But when you actually start writing, so many things can change along the way that inevitably reflect on where your story ends up. I kept changing my mind over who was going to die, who the bad guys were. That whole last scene with the final showdown just happened. Somehow it all fell into place.

What does your family think of your writing?
Nobody in my family knows that I write. They just are not into books at all. My sister owns the game of thrones series but I am sure she only bought it for the sake of saying she owns it – She did not even start watching the show until last season. I know my mother talks about how she has been told she has an active imagination and could write brilliant stories. Perhaps she could tell me her ideas and I could put them to paper. Maybe one day I will tell them, but for now, it's my little secret.

Did you like reading when you were a child?
Actually, I didn't, not really. I feel terrible to admit it now, but it's the truth. I think the perception of books and reading changes as you get older. When you are a kid in school, reading is seen as a sort of nerdy pastime but when you're an adult it all changes. If you read now, it gives off the signals as being cultured and educated. It's really something that needs to be changed. My niece, who is currently nine, enjoys reading at the moment and I hope I can influence her to keep it up. She called me a bookworm the other day... I'm not sure if it was an insult or a compliment!

Did your childhood experiences influence your writing?
This is an interesting question, I was originally going to say no but then I thought about it. My Mum and Dad split up when I was young and I ended up living with my Mum from then on. I noticed that in Eden Bound, father figures are hardly mentioned – We see a bit of Karis's Mum and even her Grandmother. But no Dad or Grandfather. I guess that comes down to not seeing my dad that often.

Tell us your most rewarding experience since being published.
When people say they enjoyed reading my book. It just makes all the time and effort worth it.

What is your least favorite thing about writing?
I'm going to take a not so wild guess here and say everyone's least favorite – Editing. I don't so much mind going back and seeing what I could improve on – In fact I love making my stories better, who wouldn’t? But catching every little spelling and grammar mistake, especially when you write in British English and your spell checker wants to be American English. It can be tiresome.

Those are some great answers! Thank you for taking the time to be here, and I can't wait to read more from you! I expect to see some great things from you in the future - like a sequel!!

Leave any questions or comments if you have some for Kyrah! They're totally welcome!